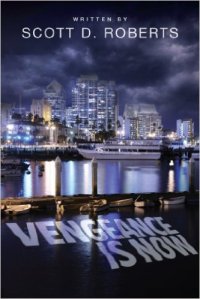 From start to finish I couldn’t put the book down, I had to know what happened next for our former cop turned lovely PI, Tate Holloway. Things just seemed to go from bad to worse as it became a game of cat and mouse. Tate’s partner, Jack, was killed by a serial killer named The Eye and Tate has never been able to live it down. Now, a few years after, on the anniversary date of Jack’s death another victim is brutally murdered. Authorities suspect a copycat killer, not The Eye himself. Evidence shows Tate was there when the murder took place and now he is running for dear life. Tate must try to figure out who set him up before he ends up taking the fall for every murder done by The Eye. Tate is running out of time and what he discovers may very well be the end of him!

I love reading books as much as I love writing them. I enjoy drinking all sorts of teas and eating dark chocolate. When I need a trip back down to earth, I watch Seinfeld for comedy relief in this serious world. I'm a kid at heart that still enjoys receiving stuffed animals as gifts. I'm a Star Wars fan with the Nightmare Before Christmas as my theme music. View all posts by cristinaisabelauthor