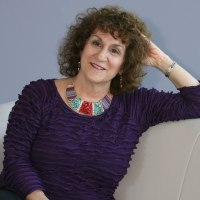 As the director of educational outreach at the Holocaust Documentation and Education Center for twenty-six years, Merle Saferstein worked closely with hundreds of Holocaust survivors helping them to pass along their Legacy of Remembrance to students and teachers. She developed and now teaches a course entitled Living and Leaving Your Legacy® and lectures on the subject of legacy to a variety of audiences both locally and nationally.

She trains hospice staffs and volunteers showing them ways to help patients leave their legacies and has worked closely with the patients doing sacred legacy work. She volunteers at a camp for children who lost loved ones—helping them to gain important tools to cope with their grief and also facilitates a writing class at Gilda’s Club for women who have or had cancer.

Merle, an extensive journal writer, has completed over 360 volumes of journals. For fourteen years, she culled through them taking excerpts according to approximately seventy topics. From this, she plans to write a series of books. Merle is the author of Room 732, a B.R.A.G. Medallion Honoree, and is a contributor to the Huffington Post and Thrive Global.

MRS: When I was around nine years old, I started writing letters to members of my family who were scattered all over the United States as well as to pen pals from various countries. I can remember telling myself that it was important that I do interesting things in my life, so I have something to write to them about. That might sound crazy to be thinking about at such a young age, but somehow, I knew that I wanted people to know my writing was worth reading. I didn’t want to be boring. And so began my life as a writer of letters, diaries (later called journals), and more.

MRS: I completed the first draft of Room 732, which I published in December 2012, in only three months. After that, I spent approximately five solid months editing, rewriting, and editing some more. I think it’s important to say that during those first three months of writing, I literally slept no more than four hours a night. The rest of the time, I spent each day and evening writing and was completely consumed with my book and even dreamt about my characters when I slept.

3.  What is your work schedule like when writing a book?

MRS: Generally, when I am writing a book, I clear my calendar of everything else I possibly can. When I wrote my first few books, which I never published, I was still working so I could only write in the evenings and on weekends.  My best time for writing is early morning when I first get up. I often do my creating when I take my daily walks—as many of those as I can at the beach at sunrise.

4.  Where do you get your ideas or information for your book?

MRS: Room 732 was a book based on a hotel on Hollywood Beach. I used the history of the hotel as the background.  I did research, mainly from old newspapers, since there was little else written about it. I also interviewed several people who had worked at the hotel in earlier years or who had attended the bible college that was located at the hotel in the 70s. That information was as close to accurate as possible.

The stories in the book were fiction. While I am not generally a fiction writer, the stories came to me quickly and easily. Quite honestly, I still am not sure how that happened.

5.  When did you write your first book?

MRS: I wrote my first book in 1981. It was my first writing project that I tackled. It was a surprise to my husband for our fifteenth anniversary. The book was a compilation of essays, poetry, and prose and was all about our life together up to that point in time. I had no intention of publishing it, but I loved working on it for him.

MRS: I am now retired but have been in education my entire career. In my last job, I served as the director of educational outreach at the Holocaust Documentation and Education Center in South Florida for twenty-six years. Once I retired and after I wrote Room 732, I developed a course called Living and Leaving Your Legacy®, which I teach in various locations throughout Miami-Dade, Broward, and Palm Beach. I also speak on the subjects of legacy, Holocaust, journaling, and more. I volunteer with women who have or had cancer and facilitate a writing class for them. In addition, I volunteer with Seasons Hospice where I do sacred legacy work with patients and work with children who have lost loved ones.

7.  What does your family think of your writing?

MRS: My family has seen me write in journals since 1974, so they only know me as someone who is constantly writing.  I’m fortunate that they have always respected my time and have given me the space I’ve needed to create. My daughter mentioned recently that she can still remember being in her bed at night and hearing the keys of my typewriter clicking away.

8.  What was the most surprising thing you learned in creating your books?

MRS: What surprised me the most was seeing how my characters seemed to tell their own story. I would often feel as though they were showing me the way. I had heard other authors say that, but I never completely understood it until it actually happened to me.

9.  How many books have you written? Which is your favorite?

MRS: I have written four books, but I have only published one. Room 732 is my favorite because writing it was such a creative endeavor and also was fun to write stories based on the different time periods of the hotel’s existence. Making them authentic was a great challenge for me. Also, I enjoyed doing research and interviewing people.

10.  Any tips/suggestions on getting started?

MRS: Long ago, someone gave me this advice when I told him I wanted to be a writer. He said that the best thing I could do was to write to the same person every day. Luckily, shortly after, I met a man who was also a writer, and we began to correspond daily. There is no doubt that by doing that, I got my juices flowing. Putting paper to pen (or sitting at the computer) is the only way to start—even if in that moment, one just writes whatever comes to mind.

MRS: A good story has to have believable characters and a plot that has the main character experiencing conflict of some kind. The theme should be relatable and draw the reader in from the start.  The setting and structure help to create a story worth reading.

MRS: I always wanted to be a teacher and began on that path when I went to college. At some point, I thought I would like to switch majors and become a psychologist. My mother discouraged me, and I listened to her and stuck with education. I was never sorry and have been grateful to have fulfilled my dreams.